Consider this quote from The Hero with a Thousand Faces by Joseph Campbell.


A hero ventures forth from the world of common day into a region of supernatural wonder: fabulous forces are there encountered and a decisive victory is won: the hero comes back from this mysterious adventure with the power to bestow boons on his fellow man.

Think of the heroes of modern myth, Luke Skywalker, Harry Potter, even Bilbo Baggins and the kids from the Narnia books (well the first few). They follow this hero's journey more or less the same way.  Even Darth Vader followed the same path, but failed the final tests.  The point here though is not the journey (yet) but the beginnings.  Anikin began as a slave, Luke a farm boy, Harry a baby and then a 10 year old boy with no idea of his potential.  Each were a "chosen one" of their tales, but all had humble beginnings.

Depending on who you ask the raised power structure in D&D 4 is either a feature or it is "broken".  D&D 4 characters start out as very capable.  They have skills, powers and a variety of things they can do right away.  To some this is a great thing, now all characters can do something.  To others it is a sign of power creep.

I don't buy the power creep argument.  In fact if you compare D&D4 to D&D Rule Cyclopedia you see that they have similar power curves.  A 30th level D&D4 Wizard could go toe to toe with a 36th level D&DRC Magic User, and both may be on paths to immortality.  In fact D&D 4 seems more like D&D RC IF you look at it from the point of view of D&D4 characters starting at about 4th to 6th level.

9 spells and four skills that this character knows out of the gate.  And that is not counting any of the new backgrounds (which gives +2 to a skill or two) or other rules to help out the 4e character further.

Just as a quick and dirty comparison, a D&D RC Magic User would need to be 7th level and be able to cast 1 4th level spell to equal the D&D 4e 1st level Wizard (Mage).  Now if you use the cantrip rules I  created (or just ignore cantrips) then the character is more of a 5th level Magic User.

Fighters are not much different really.
In Basic/RC the fighter gets a sword and told which end is pointy and which end to hold on to.
In 4e fighters (Knights) get a sword and 3 different battle stances (think of them as advanced fighting techniques) that make them more than a guy with a sword.  These stances imply martial training.

So the D&D 4 characters are not just "fresh of the moisture farm", they have training, they have skills.  This is something the designers of D&D4 wanted and it was an implicit design philosophy.

But sometimes you want to build up to something special.

People have used this argument as a full on indictment of all of D&D4, but to me that is throwing out too much good stuff, but I also like the feel of the early editions, especially Basic D&D.  SO why not have my cake and eat it too. 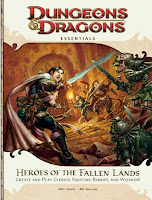 Basic levels are the "training" levels for character.  They will break up the powers of the 1st level 4e characters into smaller chunks to represent training.

For my Hero's Journey game, the characters will start out exactly like they do for every single edition of D&D.  Roll a 4d6, drop the lowest, arrange for 6 stats.  I will use the "archetypes" from Basic and 4e and these will be the only characters allowed.  So fighter, magic-user, thief, cleric.  From here they can move on to other "full" classes.  Fighter (and I might even call it "fighting man") wold lead to knights, paladins, rangers, fighters, marshals, and so on.  Magic-Users lead to Warlocks, Wizards, mages, sorcerers.  You get the idea. Or I could divide them up my how they train for their power, Martial, Divine and Arcane.  I like that idea better.

There would be 3 basic levels.  I would divide the powers and skills up so they are getting something new each basic level.  So new skill, new spell or martial stance.  I would include Backgrounds and any other ways to get skills at Basic 1. I would also include all the racial perks.

This is not without precedent, the old Cavalier had levels that came before 1st level so that you had to work your way up to them.

I'd have to put them up in a table so that by the time you completed Basic 3 and then moved to Level 1 you could gain the last powers needed to make Level 1 seem like a big leap.

Basic Levels as Normal People
Having basic levels also make for a good way to represent normal people. The village blacksmith isn't a 0 level human or even a 1st level Knight, he is something in between.  Maybe he has some training, and he is certainly stronger than his fellows, so he could be a Martial Class, Basic Level 2.  Or something.
This makes for a good way to emulate the NPC classes from the D&D 3.x DMG.

I think this needs more work, but I like what I have so far.

Why Do it?
Other than the reasons mentioned above there is also a pragmatic reason.  To play T1, B1 and B2 as intended.  Maybe that is what I can do.  Not worry about XP, but level up on Basic Level after a completed adventure.  I could also pull out the Black Box D&D I got at the last auction as a good intro set.

The more I think about it, the more I like it.  Then they get to Level 1 and the Adventure arc begins.

Thank you so much for your comment. Due to high levels of spam I have comment moderation turned on. Your post will appear after it has been approved.