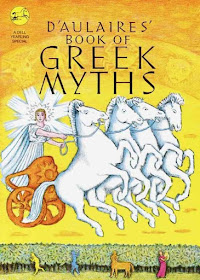 Ah. Now this feels like a homecoming of sorts.  All year I have been talking about how this is my 40th year of playing D&D.  In a very real sense, my early D&D experiences were originated and shaped by the Classic Greek myths.  By 1979 I was 9 years old and had already read all the books in my local library on myths and legends.  Since it was a small town it was the late 70s there were not a lot of choices; I had "American Tall Tales" and Greek and some Norse myths. But mostly Greek.  One of my favorites was D'Aulaires' Book of Greek Myths.  I read it many times as a child and even revisited it back in college and even as an adult. It was one time while reading this that a friend of mine let me borrow his AD&D Monster Manual to read.  I was hooked.
The rest is history or mythology!

I am not going to recount my tale of getting into D&D from that point. I have done it before and will be doing it again this year.  Today I want to talk about the Greek Myths and how they are portrayed in AD&D 1st ed and in particular focusing on what got me involved in the first place, the monsters.

I am also in the debt of my former Classics Professor, Joan V. O'Brien who would have been 92 this year.  Ten years after discovering the Greek Myths she lit a new fire under me and got me to read even more myths of our world.

This one will have multiple parts I can tell already.

There are also a number of monsters in the Deities and Demigods book that could have been easily moved over to the Monster Manual. Not as demons, but as monsters.  In particular, the Lesser Cyclops comes to mind. Another giant (the Greeks loved giants), the Hecatoncheire or the Hundred-Handed one would be another good choice.  Titans are listed in the MM and you could build one of the "named" Titans in the DDG with the stats, though many are much, much larger.  This seems like a good time to bring up Titans.


Titans, Primordials and D&D Mythbuilding
Current versions of D&D go with a time before the gods when the Primordial ruled.  In D&D 4e the Primordials were explicitly tied to the various elemental titans still running around.

This should sound very familiar.  In fact, if we go back to the D&D 3.0 days Sword and Sorcery Studios released their "Scarred Lands" books for the d20 license. In the preface of their Relics and Rituals book, Gary Gygax had this to say:


Allow me to add just a few more words here. The Scarred Lands, of which I know insufficient details at this time, seems a most intriguing setting. Perhaps you will find it likewise. If so, consider how very adaptable its premise is, the war between gods and titans, and the resulting "world" thereafter. Does it not lend itself to adaptation into many different settings? From the mythological Greco-Roman and Norse (substitute "giant" for "titan" and there you are) to any authored world environment in which two or even several groups of deities contended and one triumphed.

James Ward has this to say at the beginning of the Greek Mythos section of the D&DG.


The Greek assembly of gods is probably more familiar to most readers than others of the groups in this work, because they were woven into a literature that has lasted down through the ages. Many of our civil concepts can be traced from the assumed actions of the gods and their mates.

A lot of our concepts of...well most things come from the Greeks.

It then is no surprise that Titans/Primordial vs. Gods is universal and it also appears in our games.
Interestingly enough, almost every evil titan mentioned in the book is Chaotic Evil, although I am not sure they meet the "requirements" to actually be demons.
Let's look at some examples.

Geryon
Geryon is our first one to really stand out.  There is the devil Geryon and the Greek Giant Geryon have a link, but it would be really difficult to claim they are the same.  The Giant Geryon was the 10th Labor of Heracles.  He was described as a triple-bodied monster with human faces.  The Devil Geryon comes from Dante Alighieri's Inferno.   While my norm has been to try to fit things together, I think in this case there are far too many differences between these two creatures to try to reconcile.

The Primordials
The "gods" that came before the Titans are known as the Primordials.  Well. That works well. They represent larger concepts or even elemental properties in the universe.
There are no Primordials in the D&DG, but there are titans.  The Titans are Atlas, Coeus, Crius, Epimetheus, Kronos (Cronos), Oceanus, and Prometheus.

Among the Primordials, two are of interest here; Chaos and Tartarus.  Both of these creatures represent a "person" and a "thing".  Interestingly enough they also have a relationship to the word "Abyss".

In AD&D Tarterus is sandwiched nicely between the Abyss (Chaos) and Hades (the Underworld).

WHICH gets me to a point.  Hades should not really be Neutral Evil. Sure there is that whole "Rape of Persephone" thing but often Hades, the God, was shown as somber, ill-tempered and somewhat hateful of his role in the underworld, but not exactly evil.
Hades the underworld was the destination of ALL souls, not just the evil ones.  The REALLY evil ones and the Titans went to Tarterus/Tartarus.

The changing of the plane name "Hades" to the "Grey Wastes" was one of the few I approved of in the "Demonic Diaspora" of the 2nd Ed era. 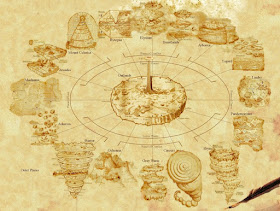 That still gives us Tarterus/Tartarus for the monsters the gods have cast down.  Sounds like demons to me.

We know that Cronos imprisoned the cyclopes there along with other monsters.  When Zeus and the Olympians came to power Cronos and the Titans were thrown into Tartarus.  Though later Cronos won Zeus' favor and became the ruler of Elysium.

Looking through the D&DG there are not many creatures that qualify as an AD&D Demon. Lots of monsters yes, demons...not so much. There are few that might qualify.

There is Cerberus, the three-headed dog of the underworld. But he has always been portrayed as unique.  The Death Dogs of the Fiend Folio are considered to be his offspring.

Enceladus is described as a giant in the D&DG.  A giant with snake bodies and tails for legs and so horrifying that any who view him must save vs. spells or run in fear.  He can also grab spells out of the air.  So myths describe Enceladus as a giant and others as a giantess.   If we change Enceladus into a demon I would be tempted to make them a demon living in Tarterus.  The stats as listed are fine.

The Furies also were known as the Erinyes and are a special case.
They are included in the Monster Manual as the devil Erinyes which are based on the classical Furies. In a way they do exactly what I am doing here.  They are the case study to show that this can work.

Next time let's talk about Typhon, Echidna, the Hyperboreans, and "the dreaded name of Demogorgon".
Timothy S. Brannan at 2:26 PM
Share