While working on my Faerie Witch post (and truthfully working on some ideas for "War of the Witch Queens") I went back to my archives. 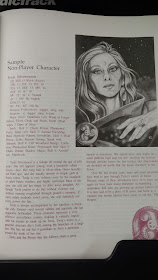 One of my favorite witch books is from the Mayfair Games "Role Aids" book Witches.

I thought it might be fun to try to "update" one of the sample NPC to my Basic Witch book.  For this I want to choose "Teela Silvermoon" since she is also a Faerie Tradition witch.

The first issue off the bat is that my Witch book is for Basic-era games and it assumes that all witches are human.  There is an "Advanced" appendix to allow demi-human races so I am going to have to go with that.

Now I have used Teela before in my games. Not often, but enough to have at least some more backstory.  In my games she is mostly the same save that she is also in love with a human ranger that patrols her woods.  She loves him, but is sad because she knows that she will out-live him.
I also have a druid circle nearby that she interacts with.

Like all elven witches Teela believes that witchcraft was created by the elves. She has no tolerance for those who despoil her woods and less so for the ones that use magic to do it.

As with other builds I swapped her Intelligence and Charisma.

Looks good to me! Can't wait to bring her back into my games.