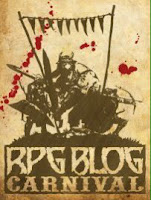 Today is the first day of summer, also known as Midsummer.

I know I was planning to do a review today, but a few things conspired against me. Work is really busy, plus today is midsummer and the RPG Blog Carnival this month is about faeries and the faerie realm. Also, my game over the weekend dealt with the disappearance of a character. This character's backstory is tied to today's monster.

Back in the early d20 days the Tome of Horrors hit the shelves and it had a number of old monsters updated for the then 3.0 d20 system and a few new ones as well.  The Fire Nymph was one of those new ones, but also struck me as something that should have been created earlier. Nymphs are fae creatures that also have elemental properties. Plus we have water nymphs, tree nymphs, air nymphs, earth nymphs, fire seemed to be the only one missing.

Since then the Tome of Horrors has been updated, converted to Pathfinder (and here) and to Swords & Wizardry.

What we don't have yet is a 5th edition version. 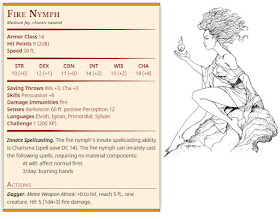 This creature appears as a very attractive and beautiful female with long, flowing fiery-red hair. Her eyes are pale blue and her skin is lightly colored with a cinnamon hint to it.

A fire nymph is a very beautiful creature that dwells on the Plane of Fire. It is akin to the nymph and dryad, though its origins obviously lie elsewhere. Fire nymphs rarely visit the Material Plane, though mages are known to request their company on occasion. A fire nymph is most easily summoned on Midsummers' Eve where they can walk about and interact with mortals and other fey. A fire nymph usually wears translucent robes of white or ash.

Summoning a fire nymph is relatively easy, but not without dangers.  The nymphs' passionate nature causes her to move from one emotional extreme to the next very quickly. When a fire nymph is angry her hair will burst into flames.

Also due to their passionate nature there are many gifted pyromancers that claim to be the offspring of a wizard and a fire nymph.